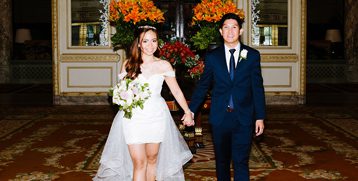 Which famous love birds got married in spring 2014?

We all know that sprig is the most popular time to get married, worldwide. With nature and hormones awakening, people feel love in the air and romance in the skies. Here are some famous couples who tied the knot in spring 2014:

Nick Carter, who made girls go crazy back in the Backstreet Boys days, married fitness model Lauren Kitt on April 12, 2014 in Santa Barbara. Look at this gorgeous couple:

The Silence of the Lambs star, Jodie Foster and Alexandra Hedison held a private wedding ceremony on April 19. They have been officially dating for four years, and not much about their wedding ceremony is known to public.

One of the most famous female rappers, Eve married British businessman Maximillion Cooper on June 14 in Ibiza, Spain. The bride wore a custom wedding dress by Alice Temperley. They met in 2010 at the Gumball 3000 motor rally.

Is there anything cuter than a Good Morning America meteorologist Ginger Zee marrying NBC news correspondent fiancé, Ben Aaron? The couple tied the knot on the beach, in Michigan on June 7th.

Sebastian Roché, French actor known for his turns on The Vampire Diaries and The Originals married actress Alicia Hannah at Chateau Les Bouysses in the south of France on May 31.

Kim Kardashian and Kanye West – May 24

The most famous reality star Kim Kardashian and rapper Kanye West organized a wedding and had the whole world talk about it for quite some time. The bride wore a gown by Givenchy, and still there are no many photos of this amazing ceremony, held in Florence, Italy.

The King of romantic songs, Kenneth “Babyface” married Nikki Pantenberg. The ceremony was held in Southern California on May 17. They have been dating for 7 years and they have a 5-year-old daughter named Peyton Nicole. Congratulations to this beautiful family!

Our couples have been featured in