Roosevelt Island – The best place to elope in New York!

June the 13th is the Island’s Day so maybe it is a perfect chance for you to visit and meet the diverse community living here at the place also called a Quiet Manhattan!

Have you ever heard of a New York City’s narrow island, lying between Manhattan Island and borough of Queens? Owned by the City of New York and considered as a part of Manhattan, in 1971 was renamed Roosevelt Island after Franklin D. Roosevelt.

If you have never visited this peaceful, green oasis settled in a concrete jungle, Roosevelt Island Day is the perfect opportunity we would love to use to get your attention and to present the beautiful Island not only as a weekend-in-nature destination but as a still sneaky but attractive elopement wedding location! Roosevelt Island – The best place to elope in New York! 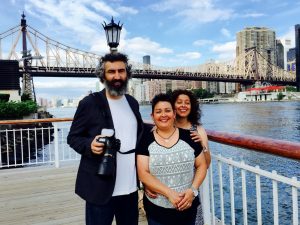 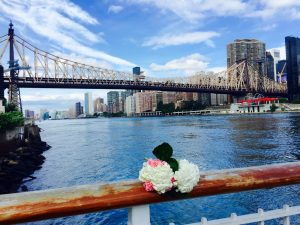 Long is the history of the island that was known as a Welfare Island. Now days you can take a historical walk through the island and to find out the interesting facts about this community’s evolution. In the 19th century island housed several hospitals and a prison. It’s still possible to see some beautiful remains of that time, for example Island’s oldest landmark, historic Blackwell House, one of the city’s few remaining examples of 18th century architecture.

Whether you imagine your NYC wedding ceremony in the middle of a blooming flower garden or near some of the National registered historic places and monuments, it is all possible at the Roosevelt Island – the best place to elope in New York. On the northern side of the Island lies a 50 foot (15m) Gothic style lighthouse, designed by J. Renwick famous by the St.Patrick Cathedral in New York. Pictures we captured are enough for you to visualize the perfect wedding ceremony performed by our NY State licensed wedding officiant who can marry you and make either such a romantic or an unusual marriage ceremony for you at the Roosevelt Island. If you are more fond of downtown Manhattan skyline mixed with a Statue of Liberty Island view, we can recommend going to the FDR Four Freedoms Park, dedicated to F.D. Roosevelt, opened to the public in 2012 as a State Park.

What catches the most of the visitor’s attention, is for sure a Roosevelt Island Tramway! Opened in 1976, connecting the island directly with Manhattan, after renovations it was reopened in 2010. Just a few minutes long ride over the East river is an unforgettable impression you will have! What’s more interesting our NYC elopement photographer is always ready to make some perfect wedding photos of you during the Tram ride! Wedding gown and a colorful bridal bouquet allowed in a Tram!

If the amazing pictures you can see and a non-shabbiness of the Roosevelt Island as a top elopement wedding location we recommend are not persuasive enough, maybe you will love to hear some interesting details? Even Charles Dickens found the Island an interesting topic he wrote about in his “American notes” (1842)! We were also surprised by the fact that one of the most famous prisoners on the island was Billie Holiday (served on prostitution charges). On the long list of celebrities – former residents of the the island you can find Kofi Annan’s name or Sex and the City star – Sarah Jessica Parker!? Even Hillary Rodham Clinton, candidate for the president 2016, chose the Roosevelt Island as a significant spot for the official launch of #Hillary2016, her major speech and first major campaign’s event!

Inspired by the spirit of the diverse community living on the Island, we are launching the idea of the Roosevelt Island – the best place to elope as a top and future most desired elopement wedding location, on a Roosevelt Island’s special day!

Rachel and Angela picked Roosevelt Island and its day to be their special one! NYC wedding officiant married them in a gorgeous flower garden, and our famous NYC elopement photographer, also a Roosevelt Island’s resident, took some beautiful wedding photos of their elopement wedding with a Queensboro Bridge over the East river backdrop.

Here is the sneak peek of a beautiful NYC wedding ceremony we performed on a Roosevelt Island’s Day. You are welcome to take a look!

If you want your wedding day perfectly organized with no stress and no worries, just choose one of our all-inclusive elopement packages and we’ll be happy to set all the details for you! All the recommendations for the Roosevelt Island – The best place to elope in New York and a brand new, top NYC elopement wedding location!

#Take a free red bus ride and meet the Island and Islanders!